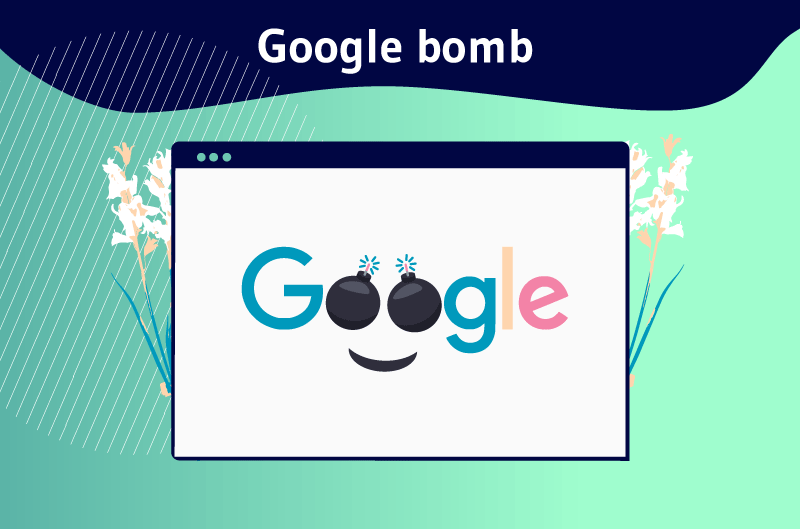 Google bomb or Google bombing is an underground SEO practice that aims to improve the ranking of a web page for a specific keyword. It consists of increasing the number of web pages that link to the target page. The inbound links that lead to the page in question are linked by the same anchor text. The anchor text is nothing more than the keyword for which the web page will be ranked higher

” shows Microsoft’s website on the front page of the search results.

One might think that this was an SEO error by Google. But instead, the search results were manipulated to place the Microsoft site at the top of the results for that phrase

I will provide some answers to these questions in this article as well as examples of Google bomb.

Google bomb is a technique that has been talked about for many years, but which remains incomprehensible for many. In this chapter, I will discuss the definition of Google bomb and how it works.

Google Bomb is a “Black Hat” technique that consists in taking advantage of the flaws of the Google algorithm to improve the positioning of a page or a website. It involves the creation of backlinks from several web pages to a target page with the same anchor texts.

The Google bombing is a real work of referencing to rank a site or a web page for a given keyword. Thus, the website or the web page appears first on the search results page when a search request is made on the keyword.

Google bombing also works in the case of image searches. It consists in over-optimizing certain images for a given keyword.

The expression “Google Bombing” was first used by Adam Mathes in 2001 in an online magazine. He explained in detail how he had recruited bloggers to create links to his friend’s site with the keyword “talentless hack”

Since then, Google bomb has not stopped attracting curiosity. To better understand the practice of Google bomb, let’s take a look at how Google ranks web pages.

1.2 How does Google rank web pages?

The ranking of pages and websites at Google is done with the help of the PageRank algorithm. This algorithm ranks web pages in the search results in order of relevance based on the importance of incoming links combined with manyother factors.

The algorithm considers each link that refers to a web page as a vote to the latter. The more backlinks a page receives, the more likely it is to have a good ranking.

In addition, good inbound links are those that come from sites of high authority and carry a good anchor text

Good anchor text practice is essential to rank a linked page in search engines for a specific keyword.

1.3) How does Google Bombing work?

Google Bombing is a collective effort to deceive the PageRank which was once vulnerable to manipulation. Many webmasters or bloggers link to a target page with a particular keyword

Google tends to consider that the anchor text of the link reflects part of the content of that page. The search engine thus ranks the target page for the keyword in the anchor text.

But in this case, this keyword has no relation to the page being ranked.

Although this practice is known with Google, it is not specific to the web giant. It also influences the ranking in other search engines

The case of Microsofts mentioned at the beginning of this article also concerned AOL. A second case concerns the keyword “miserable failure” which displays the biography of former president George W. Bush in first position on Google, Yahoo and MSN.

1.4. The advantages of Google bomb

A good ranking then attracts traffic to the targeted site. This is because users will visit at least one page in the top three that ranks high in the search results.

In addition to attracting traffic, Google bombardment promotes recognition of a brand, product or service

However, I do not recommend this SEO technique. It is much better to focus on “white hat” techniques to position a website safely.

Chapter 2: The motivations of the Google bomb and the measures of Google

While it is regularly applied for political activism, it is also applied for commercial and competitive purposes. The extent of the use of this technique is leading Google to take steps to counter the Google bomb

This chapter is devoted to the motivations of the promoters of this technique and the measures taken by Google in response.

2.1. The motivations of the Google bomb

Political leaders are regularly victims of Google bombing. It is a form of expression by which a group of people express their disagreement about a decision, a position or a political fact.

A web page was created in 2009 to divert search queries to “French military victory”. The first result that appears when typing the expression leads to a page that reports a lack of results

It suggested searching for the keyword “French military defeats”. This page in the 18 hours after its publication accumulated more than 50,000 visits.

In 2009, a large group of disgruntled bloggers linked Nicolas Sarkozy’s official website to the crude expression “Asshole of the Web”. This campaign was successful and Sarkozy’s site appeared first on the search results page.

In September 2020, Sarkozy’s Facebook profile is placed at the top of the Google page for the same expression, “Asshole of the Web”.

This recent bombing links the word “idiot” to images of the former American president, Donald Trump. The perpetrators managed to manipulate Google to link Trump to the word “idiot”

Some people have adopted the Google bomb technique in order to rank their website higher for a given term or to confuse search results for unfavorable reviews. Wikipedia pages are particularly vulnerable to serve this practice as they are freely editable.

As an example, the American company Quixtar was accused by a group of people of Google bombing fraud. They accused Quixtar of using a vast network of websites to downgrade sites critical of the company

It ranked other sites in place of these sites in order to bring them down in the search results. The company defended itself and claimed that its practices were consistent with search engine rules.

The Google bombardment was creating challenges within the webmaster community. In May 2004, the “SEO Challenge” was created with the websites Blue and SearchGuild and aimed to rank a site at the top of the search results for the keyword “negritude ultramarine”

Another contest was initiated in March 2005 between 5 professional web developers to put their site at the top of the search results for the keyword: “crystalline incandescence”.

2.2. Google’s response to the practice of Google bomb

The extent of the use of Google bombing creates a problem for online search. It calls into question the relevance of search results for optimized keywords in Google bombing cases.

The abuse of these techniques could change in many cases, the relevance of queries for an average user. Google then responds to Google bombing by changing its famous algorithm, Pagerank in 2007.

The PageRank update has greatly affected the Google bombs. They were replaced by simple articles

Thus, we find instead of the Microsoft website, Search Engine People at the top of the search results for the expression “more evil than Satan himself”.

However, not all Google bombs have disappeared from the search engine. For example, the search engine still returns images of the former U.S. president when searching for the keyword “idiot”.

In addition to this measure, Google is implementing a system to counter any manipulation.

Google does not like the manipulation of its system to obtain priority in its ranking. The firm inflicts a series of punishments to sites that use unsavory practices. As a result, the punished site becomes invisible and remains deprived of traffic from Google.

Google uses an algorithm that scans and inspects websites to identify manipulative techniques. The algorithm automatically triggers the penalty for sites that are found not to comply with Google’s rules.

There are also manual penalties that a Google employee can impose on a site when it is found to be in violation of Google’s terms of service.

These various penalties can be removed, but are still difficult, which is why webmasters should steer clear of manipulative techniques like Google bomb.

The SEO tips tricks are clearly beneficial to propel a website to the top of Google rankings.

Google works hard to provide relevant search results to its users. The firm works to reduce the vulnerability of its algorithms

Therefore, it would be difficult to say that the practice of Google bomb is still as easy as it was in the beginning. Rightly so, there are fewer cases of this practice in recent years

But the bombing of the word “idiot” linked to images of Trump recently in 2018 does not reassure that the practice of Google bomb is over.

This technique is illegal according to Google’s rules, but some people do not hesitate to use it to support various causes.