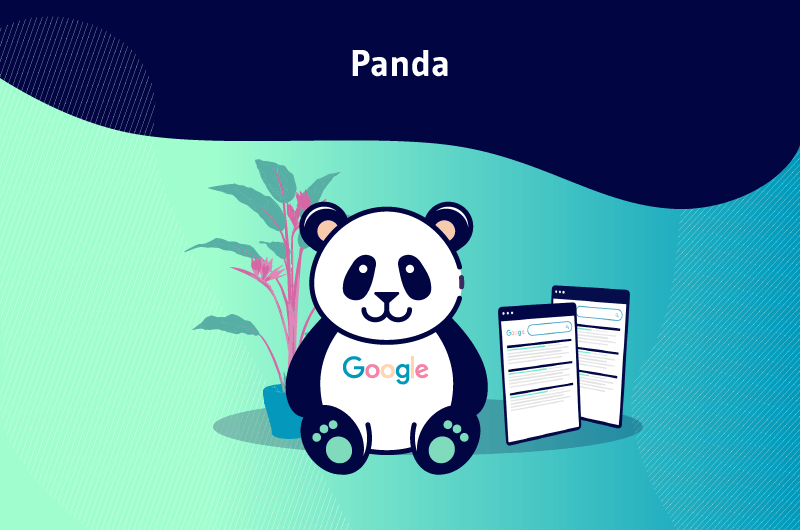 In an effort to improve the user experience, Google is constantly changing and updating the core algorithm it uses to determine the order in which search results are returned.

”Our goal is to get you to the answer you’re looking for faster, creating an almost seamless connection between you and the knowledge you’re seeking.”

Panda is a major update of the Google algorithm whose arrival has created much controversy in the SEO industry.

In order to better understand it and know how it evolved, I invite you to read this article.

Chapter 1: What does Google Panda mean?

To better understand the concept of the Panda algorithm, it would be more appropriate to start by defining first what an algorithm is for search engines.

In SEO, algorithms essentially refer to ranking systems designed to analyze all the web pages that exist in the index of search engines

It should be noted, however, that it is the combination of the functions of the various algorithms that allows Google to present relevant and useful results to users in a very short time

However, in the participatory function, each algorithm bases its review on more than 200 ranking criteria.

This being the case, any website that takes all these ranking factors into consideration in its SEO strategy will undoubtedly see itself at the top of the search results.

1.2. definition and purpose of Google Panda

As defined above, this was the major algorithm update used by Google to announce its stance on providing an excellent user experience in search

Indeed, the level of quality of the content of a web page plays a direct role in the satisfaction of users when they search for information on the net.

If users receive results that are not of the highest possible quality and value to them, it hurts the subsequent value they place on Google’s search engine.

Google’s goal was to improve this for the millions of users on the platform so that they could find highly relevant and useful information.

Therefore, Panda was implemented in order to punish low quality or spammy content trying to rank in the search engine results

In short, you have to understand that Google is doing its best to eliminate results that are irrelevant or useless, only to satisfy its users.

Its first update affected more than 12% of search results, which was a pretty consistent number and got the whole SEO industry moving

Talking about this new update that has seen the light of day, Google has made it known that low quality content and duplicate content are the main targets of Google Panda.

Obviously, the Google Panda update was good news for webmasters who were focusing all their efforts on quality content.

Unfortunately, for websites with low quality content, the Panda update was a kind of punishment from Google.

This made a lot of webmasters think about improving the quality of their website’s page content to escape the Penda penalty.

1.4. What is the Timeline of the Panda update?

Before becoming an effective algorithm to be integrated into Google’s core algorithm, Panda went through several updates which are listed below:

Panda 1.0 update on February 24, 2011 At that time, Google severely punished web pages with weak content by a permanent removal. This update impacted 12% of search queries.With the Panda update, entire domains were affected, rather than single pages of a site.

However, they publish a lot of content just to attract more visitors, with the sole purpose of getting clicks and giving a good impression to search engines. They don’t really care about the quality of the content as much as the traffic they get from it

When in reality, before a user enters his query, he trusts Google to provide him with the best possible results.

So, the Panda update tries to detect those contents that offer no value to users and filled with spam to penalize their SEO.

The Panda update allows Google to ensure that the content presented to users is unique, original and useful.

Chapter 2: How to avoid the Panda penalty?

While in reality, there is not a standard solution to escape Google Panda, there are a few content strategies you should implement

The main reason for the Panda update is to allow Google users to find useful content in the search results.

On the one hand, if users are not satisfied with the results they get in the search engine, they will probably switch to other search engines.

But if they are more satisfied with what they get there, it will become their best search engine. Therefore, Google is positioning itself to remain the search giant on the web.

Besides, it is its continuous effort to provide the best possible content to users that has made it the “Web Giant”.

For one, high-quality content must start with a catchy title that appeals to the target audience.

While analysis confirms that over 80% of people will read your title and only 20% read the rest of the content, then it makes sense to say that having a good headline is extremely important.

Besides, an image speaks more than 1000 words. Visual content is easier to consume than textual content. Therefore, it is necessary that you include images or videos in your content.

In addition, a study forrester study shows that visual content is processed 60,000 times faster than text in the brain.

Ranking in the top position will be worthless if your content is not useful and difficult for your readers to understand. Obviously, this type of content is for search engines.

The problem with some content writers is that they usually don’t understand who they need to address in their writing.

Whereas it is crucial to seek to understand your audience and the problem they are trying to solve with your content.

The easiest way to research your audience is to create a persona for your audience that shows all the characteristics of your ideal audience.

In addition, design is also an important factor to consider when creating content. Well-designed content will improve the user experience, engage readers and keep them hooked on your content.

Thin content is usually of poor quality and does not provide any value to the user. It very often consists of 100 to 300 words.

On the other hand, long articles bring more satisfaction to the readers because of its size which allows the writer to give more details about the topic.

In addition, a study by Backlinko reveals that the pages of search results are dominated by content of more than 2000 words.

Google Panda is the algorithm change that allows Google to recognize and penalize the ranking of low quality content.