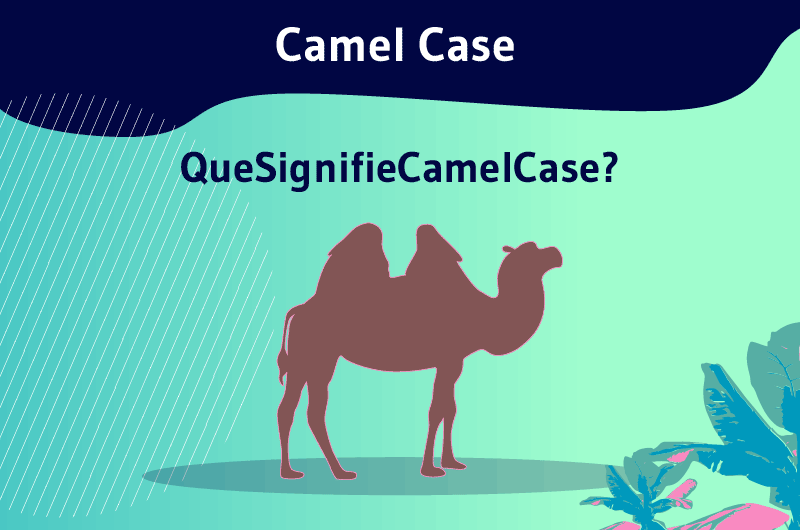 The English term Camel Case, << Casse de Chameau >> or << Majuscule Incorporée >> in French, is a notation that consists of writing sequences of words with the first letter of each word capitalized. But the first letter of the first word can sometimes be lowercase depending on the type of Camel Case. These different words can be glued together or separated by a space. The objective is to make compound words more readable. In SEO, its main function is to make the titles of webpages more visible in SERPs.

Many terms are used to designate the techniques for optimizing the visibility of content on the web. Among them, there is the expression “Camel Case”.

Known as “Camel Case” in French, this expression refers to a particular way of aligning a set of words that all begin with a capital letter, except for the first word which varies. It is often used as an SEO strategy to increase the visibility of web page titles.

In order to better understand this topic, we will deal with it from 4 main angles namely:

Chapter 1: The variations of the term Camel Case

Originally, this practice was called “medial capital”. There are also several lesser-known terms used to describe it, namely

The term was first used in one of Newton Love’s writings in 1995.

Here are some of its variations:

As an example of use of the UpperCamelCase, we have: ” YorTube”, ” AdWords” or ” AirPod”.

This is also a variation of the Camel Case with the particularity of highlighting all the first letters of all the words constituting a compound word, except the first word

This practice leads to words such as: ” newString” and ” myOneMethod”.

In natural language, the Camel Case is used in many different cases.

2.1. Linguistic use of the Camel Case in word arrangement

It is rare to use medial capitals as a general rule for writing common words. However, it has been found that many languages use the Camel Case when faced with particular difficulties when two words are arranged.

For example, in Italian we can use pronouns for verbs in suffix. Thus, we can obtain a sentence like this one: “non ho trovato il tempo di risponder Le ”

In the Italian expression, ” The “means ” You “and should be written with a capital letter at the beginning of the word and inside the sentence, as this is the form of pronouns used to express consideration for a person

In German, to say “male students”, we use the word ” StudentInnen”. Although the use of the medial capital form is against the rules of German spelling, it is not uncommon to come across this form of writing this word

Many other languages such as Irish also use the Camel Case, either by gluing the words together or by hyphenating them. Thus, we have words like tAlbanach or t-Albannach.

2.2. Use of the Camel Case in transliteration

The Camel Case is used to transcribe letter by letter, the grapheme of a spelling system into another one that corresponds to it

For example, the transliteration of Hebrew b’Yerushalayim means “in Jerusalem”. The same is true for many other languages, including Tibetan proper names.

2.3. Use of the Camel Case in abbreviations

The Camel Case is generally used in abbreviations. The purpose here is to give an idea of how the words will be spelled when they are fully written.

For example, in academia, the abbreviations PhD or BSc are used for academic titles. Similarly, in a language like German, embedded capital letters are used to abbreviate the names of statutes

Very often, we come across abbreviations with more than two capital letters. For example, in German, TzBfG stands for the law on part-time and limited-term employment

For a short time in France, Casse de Chameau was used as an alternative to initialisms. Thus, there were abbreviations like OuLiPo : Ouvroir de Littérature Potential

Chapter 3: Modern and Technical Use of the Camel Case

In modern and technical industries, the use of middle capitals is very common.

3.1. Use of Camel Case in chemical formulas

Like all those with school experience, you have already encountered chemical formulas written with alternating upper and lower case letters

This usage for technical purposes was invented in 1813 by Jacob Berzelius. This Swedish chemist wanted to replace the numerous nomenclature and symbol conventions that his colleagues were using until his time

Thanks to this use of the Camel Case in chemical formulas, it was now possible to write many formulas without spacing, but especially to be able to analyze them without ambiguity

As an example of a famous chemical formula written with incorporated capitals, there is NaCl which stands for Sodium Chloride.

This technique invented by the Swedish, continues to be used today

3.2. Use of the Camel Case by the brands

From the beginning of the XXth century, many companies and brands had names with incorporated capital letters

3.3. Use of the Camel Case in computer programming

Between 1970 and 1980, in several computer programming languages, embedded capital letters were used

The purpose was to ratify a standard or substitute naming convention for multi-word identifiers. The true origin of this convention is unknown.

The term “SpeedCo” was used to refer to IBM’s Speedcoding system. In one of his articles in 1965, Christopher Strachey revealed a program with embedded uppercase identifiers including “NextCh” and “WriteSymbol”.

With the adoption of ASCII in 1960, the availability of lower case letters and underscores became universal_“. Many programming languages, including C, were quick to use underscores as word separators

Although the underscore is a solution that removes the ambiguity of the analyses, some programmers have refrained from using it

The reason is that they were afraid of confusing underscores with spaces. Instead of underscores, these programmers use the Camel Case technique.

3.4. Use of the Camel Case by computer companies

Since the 1970s, many computer companies have had names with embedded capital letters or have used the Camel Case to create product brands. This way of doing things in the computer industry, continues to this day. There are for example

3.5. Use of the Camel Case in the field of computer names

The arrival and success of the PC in the 1980s, popularized the use of the Camel Case in all areas of activity. This practice has become very common

It is often used in the constitution of trade names. As an example, we have

It is also used to name neighborhoods. As examples, we have:

However, the orthographic use of the Camel Case to write the names of these neighborhoods is gradually being lost. For example, we have Tribeca instead of TriBeCa.

Chapter 4: Using the Camel Case as an SEO/SEA and Marketing Strategy

Because of its advantages, the Camel Case is widely used in SEOespecially for the title tag

More used in the English-speaking world than French-speaking, this technique also called ”embedded capital”, can improve the display of a web page in SERPs (search engine results pages).

Thus, the contents of these pages are quickly noticed by Internet users who will hardly miss to go and consult them. A use of the lowerCamelCase in SEO, gives for example: ” inTheBin “or ” fruitInTheBin “.

However, the use of the Camel Case in SEO does not improve the ranking of a web page in search engines

In order for the integration of capital letters in the title to achieve the desired results, the web page must already have a good ranking in search engines. Ideally, this page should appear on the first page of search results

By using the Camel Break, you increase the likelihood that the user will click on the link leading to your web page. First, the keyword contained in the title of your page (or article) must be relevant

Then, you will have to incorporate capital letters that improve the appearance of the characters of this keyword. The optical effect that this way of spelling the words generates is what increases the visibility of the keyword and therefore, the click-through rate (CTR).

In the practice of organic SEO, the use of middle capitals is more often done at the title tag level

Chapter 5 : Other questions about Camel Case

It is a practice that consists of aligning words that begins with a capital letter. But depending on the type of Camel Case, the first letter of the first word can be lowercase. These word variants can be stuck together or separated by a space.

In SEO, it increases the visibility of the title tag in SERPs.

Software developers also often use it when writing source code.

It is a type of CamelCase in which the first letter of all compound words, from the first to the last, are capitalized

Words starting with a lowercase letter followed by an uppercase letter (for example, iPhone) are considered lowerCamelCase words

5.4. What is the difference between camelCase and PascalCase?

5.5. What are Snake Case and Camel Case?

Snake Case is another word convention similar to CamelCase. It involves writing sentences or compound words in which the words are separated with an underscore (_) instead of a space.

The Camel Case is a widespread practice in the English-speaking world and is gradually being adopted in the French-speaking world. It allows to optimize the visibility of a word, especially when it is relevant

Although it does not improve the ranking of a web page in the engines, it is widely used as a good SEO/SEA practice

Marketers, bloggers and web professionals, if until now you have not integrated this practice in the way you formulate your ads, tile tags and metas, now is the time to do so